Mobile App Trends That are to Dominate the Market in 2014 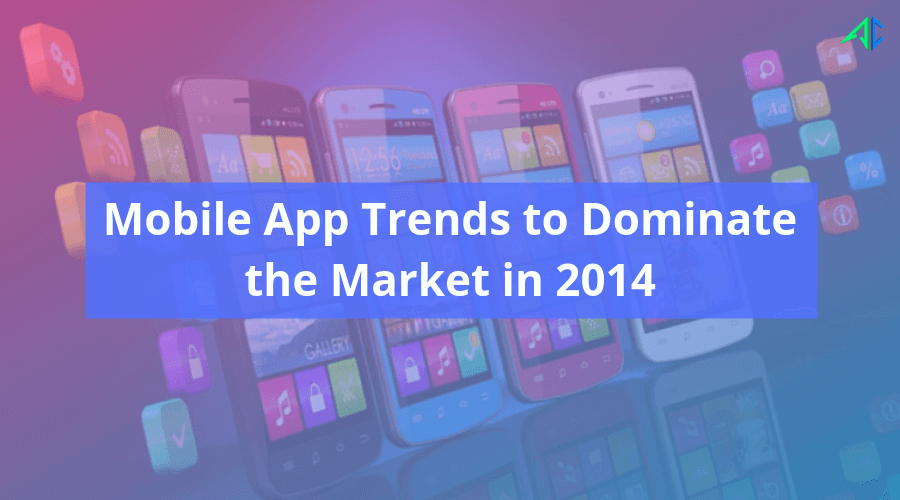 In this blog post, We have discussed the different mobile app trends that will be dominating the market of mobile applications in 2014.

Why mobile apps are getting advanced day by day? Have you thought ever? Well, even if you haven’t, we will let you know. Well, the credit goes to mobile app development trends and technologies that are introduced majorly by Google and Apple, after passing each year.

The introduction of new trends impacts on mobile development to a greater extent and lets developers build robust mobile apps with cutting-edge features and advanced functionalities. Here, we are going to discuss the mobile app trends that will be popular in 2014:

Facebook, G+, Pinterest, and Snapchat are some of the popular social applications that are usually seen on the users’ mobile devices. To improve the viral-ability of mobile apps, the integration of social functionality is a good move. For instance, if a user shares the score of gaming apps with their Facebook friends, then it will encourage the sharing of the user base in the form of a marketing tool.

Recently, Google bought Nest, which is the maker of smart appliances. Nest introduced a smoke detector, which is directed by a smartphone app. Samsung also introduced a washing machine that is controlled by Wi-Fi. Television and video game consoles are also seen as a boom in 2014 in terms of connected objects.

Also read: 11 Mobile App Development Trends to Watch Out in 2019

Stress on Clear and Large Typography

It seems unbearable to go through the hard to read content. Mobile apps development has also taken a turn in this direction to offer a better typography. Mobile apps to support clear typography are being developed that are expected to be one of the popular trends of 2014.

The charm of Android and iOS is to Prevail

These two platforms are still earning better revenues as compared to the other platforms. But, the difference between these two is that Android is appreciated for its massive reach (business) whereas iOS is capable of generating matchless revenues. In the coming year as well, these two again set to remain the center of attraction in the form of a powerful mobile app development trend.

More use of Multi-Screen

According to the experts’ predictions, there were around 5.7 devices per home in the year 2013, but in 2014, this will be 6 or more devices in each home. Presently, there are new types of mobile devices available, such as smartwatches, smart glasses, and other wearables, with different sizes of screen. So, the year 2014 is expected to witness the mobile app development for multi-screen.

Editor’s pick: Hybrid VS Native Mobile Application: How to Pick The Right Ones?

Native apps are indeed wonderful when it comes to using them, but they may prove to be costly and also demand resources to develop something, which goes with various platforms. Many mobile apps are developed in HTML5 that supports cross-platform, hybrid app development doesn’t need coding for each operating system. It helps developers in reducing both cost and time of development. HTML5 apps will be the hottest trend as this platform is acclaimed for offering animated and media-rich all without getting dependent on technologies such as Microsoft Silverlight or Adobe Flash.

According to this new trend, the UX consultants have shifted their focus from single color or simple background to more complex images with blurred background. On one hand, the blurred images provide some definition to the design, on the other hand, it compels the visitors to focus on the foreground elements.