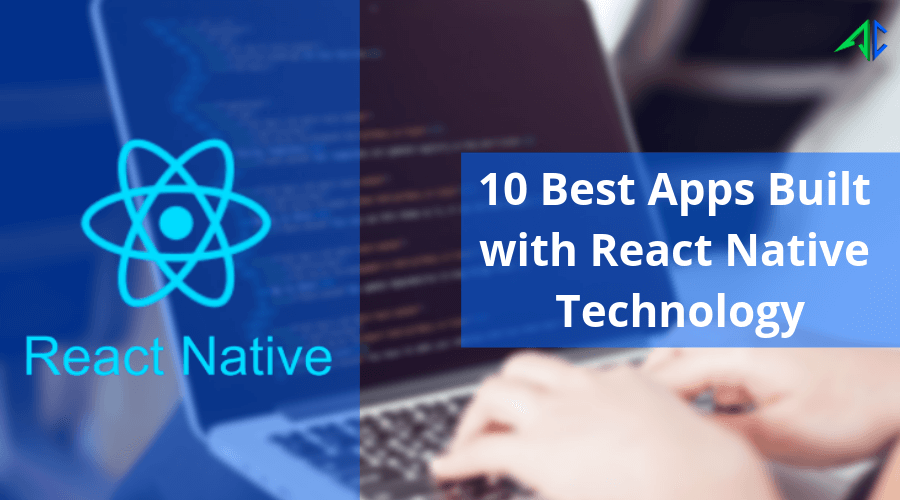 React Native framework has hastened the process of making successful cross-platform apps since inception. This blog will talk about the top 10 best react native apps developed across a variety of business verticals and functionality.

First came into existence in Facebook’s internal Hackathon project organized in 2013, React Native was launched officially in 2015. Now, it has become the most popular cross-platform app development frame based on the React JavaScript library for Android and iOS app development. Also, React Native has got 2085 contributors committed 19868 times in 68 branches with 342 releases on Github, and counting.

With the ever-increasing demand for this technology, businesses are gravitating towards it as they have realized React Native is the future of mobile app development. Per Markets and Markets, cross-platform apps are on the rapid rise, and it is estimated to increase to $80.45 billion in 2020; however, React Native framework plays a crucial role in cross-platform app development.

What is React Native?

React Native is a JavaScript-based cross-platform mobile development framework created by Facebook in March 2015. It is designed to develop apps for both Android and iOS platforms with a native-like performance from a single code base.

React Native leverages the power of the most updated version of JavaScript with JSX, which is an extension of ECMAScript 6 or ES6, helps React Native developers to create an incredible UX/UI.

Facebook employed the full potential of React Native to build its first cross-platform native app called Ads Manager. The app lets users track a complete performance of the ads running on Facebook. Users can access, manage, and also stay connected with the performances of their app, no matter where they are. The framework is ideally suitable for a lot of business logic and handles the differences in ad formats, time zones, date formats, currencies, and more.

React Native has given Facebook Ads Manager an intuitive UX, clean user interface, precise and fluid navigation that ensures a fantastic user experience. The best thing about this React Native mobile app is its flawless animations and transitions.

Walmart needs no introduction, with over $500 million in revenue last year, Walmart deserves to be on top of the Fortune 500 list. Walmart always keeps his spirits and aims high with having an aspiration to become the world’s biggest retailer. To improve its customer experience, Walmart keeps on exploring new ways with new technologies. So this time, they decided to go with React Native app development for their mobile app.

Tesla, the world’s famous electric car producer, also has an app built with React Native. Tesla app lets owners communicate with their vehicles and Powerwalls smoothly. Tesla also enables them to see the progress of charging, heating/cooling conditions of the car, locating vehicles, and more.

React Native’s advancement of technology encouraged Tesla to diagnose and locate a vehicle with the help of a smartphone in a much better way. Tesla has noticed positive customer feedback after leveraging the power of React Native.

Skype is another sought-after app built with the React Native framework. Skype lets users stay connected, share thoughts, exchange ideas, and many other things by sending texts, videos, etc., through various devices. It is the only app that has witnessed its growing usage for both personal and professional purposes.

Choosing React Native turned out to be one of the best and lucrative choices for Microsoft as the Skype app now has crossed over 4.9 million active users with the app downloaded over a billion times, and the number is dramatically increasing.

Airbnb, a popular travel app built with React Native, lets users have a pleasant travel experience like never before. The app enables users to develop a passion for traveling, exploring the whole world, and feeling a new adventure. Users can even grab an earning opportunity with Airbnb, on every booking. RN framework worked wondrously with Airbnb and brought pleasure for engineers as well.

The most significant advantage of choosing React Native for the Airbnb app was the ability to reuse the code. With the RN framework, most elements were extremely reusable. Also, React made the code very easy to refactor and iterate on.

Being one of the most coveted photo-sharing social media platforms, Instagram also took the challenge by adopting React Native into their existing native app from the simplest view you can imagine: the push notifications view, which was initially implemented as the Webview. The significant effect that the React Native brought to the app was easy maintenance for both iOS and Android platforms.

Initially faced a few problems, the React Native framework eventually improved developer velocity. 85% to 99% of code was shared between Android and iOS. With this, the team delivered a much faster app with a native solution.

React Native helped developers in adding a bunch of new and innovative features. Another advantage of React Native developers befitted with was automated code refreshes and accelerating the release of new product features.

Since its inception in 2006, Wix has been providing first-rate web hosting and website design services. The platform allows users to build their sites on HTML5/CSS, as well as mobile websites using drag and drop features without knowing any coding.

Wix chose to build its mobile application for its users with the React Native framework that came with a set of challenges. Still, the team managed to escape the hurdles efficiently and finished the development process in 3x less than usual.

Selecting React Native framework for app development helped the entire Wix team with speed and agility of web app development to the hybrid space with native results. Also, Tal Kol (head of mobile engineering in Wix) initiated his statement in favor of RN via video and said that React Native was a game-changer for Wix.

A winning app built with React Native, SoundCloud Pulse, is recognized globally as a popular music streaming platform. With over 200 million tracks, it redefines entertainment and excites everyone who loves music. It embraces artists from all over the world and lets them upload new music, manage accounts, go through stats, and more.

The team initially faced a few obstacles while developing the app with React Native but managed to get rid and leveraged from the fast coding process.

SoundCloud’s main reason for choosing the React Native for mobile app development was the user-friendliness of the framework. The automatic live code reloading made the process simpler for developers, resulting in a great app experience.

Backed with React Native, Salesforce is a one-stop solution that allows you to run your business from your phone. It is feature-packed with AI as your sidekick. The Salesforce mobile app unlocks a whole new level of productivity, personalization, and speed.

With this app, you can take immediate action with exceptional views and insights into your business, powered by Einstein Analytics. Get the information you need precisely when you need it to make informed decisions from anywhere in the world.

React Native has enabled so many features in this app, such as faster experience, dynamic, and productive mobile record pages, seamless navigation to increase productivity.

The app examples shared in this blog manifest that React Native is a powerful, modern technology, and one of the preferred frameworks alternative to the native app development. If you are thinking about expanding your reach and services to smartphones, it is a must-advisable to consider choosing React Native.