Google Material Design vs Apple Human Interface Guidelines: Which Is Better and Why? 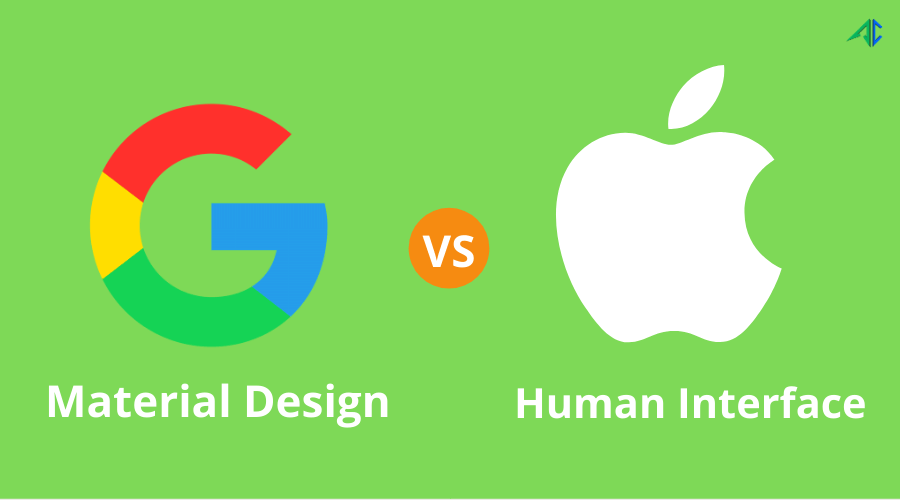 Are you looking to design an iOS or Android version of an app? This guide will help you. This post compares Google Material Design vs Apple Human Interface Guidelines comprehensively and helps you determine which one you should choose and why.

Both Google and Apple compete to provide their users with an intuitive user interface with great usability. They aim to craft an interface using which the users don’t get confused and can get along with the apps facing no hustle-bustle. Both Google (for Android) and Apple (for iOS) have different design standards and different user behavior.

With both Android and iOS accounting for over 99% of the mobile market share worldwide, businesses are looking for apps development companies that can consider both iOS and Android development leveraging Google’s Material Design and Apple’s Human Interface Guidelines efficiently and effectively.

However, when it comes to choosing one between Material Design vs Human Interface Guidelines, the decision becomes difficult. Businesses and even apps design companies get perplexed because it’s a battle that’s been going around for a while. Moreover, both Google and Apple’s design come up with their unique offerings, making it difficult to choose one that fits all.

Before we dive in, compare Google Material Design vs iOS Human Interface Guidelines, and explore the differences between these two, let’s first find out what they are. Sounds good? Let’s jump right in!

What Is Google Material Design?

Released in 2014, Google Material Design has a set of guidelines and principles for enduring with the material design rules. Anyone who is willing to make their Android a material design UI will have to follow these rules to give the same look on all Android devices.

What Are Apple Human Interface Guidelines?

Apple’s Human Interface Guidelines (HIG) is a software development document that offers iOS development agency a set of recommendations. Their objective is to enhance the user experience by making app interfaces more consistent and intuitive.

The HIG enables applying the visual design and creating consistent access to and behavior of the interface’s common elements — from simple ones like buttons and icons up to more complex constructions like dialog boxes.

The main difference between the two is depth. When it comes to interaction with apps and devices, both Google and Apple have different opinions. Where Apple sees mobile devices as a window into another world, embracing infinite depth in their applications.

On the other hand, Google has been inspired by the flat design movement, thus believing that humans should interact with the components as if they were stacked over each other. In simple terms, users should feel as if they are holding the screen on their palms.

Clarity can vary depending on the platforms and what you are familiar with. That being said, what is clear for Apple and Google users is directly proportional to what they are habitual with. For instance, Android users may not recognize the iOS icon instantly or vice versa.

Apple promotes mainly inclined and blurred design; however, Google gives preference to drop shadows. All in all, both platforms copy in real life in different ways. However, the core idea is always stuck to simplicity to achieve the optimal results.

Navigation plays a vital role in any of the app’s UI. Your app’s structure should be organized according to the content, and task users want to see and interact with. The clearer and more intuitive the navigation is, the more users will be attracted to the app. When it comes to features of UI, Google and Apple think differently.

Google’s Material Design has fewer navigation rules and gives a great level of flexibility for customization to the designers. Conversely, Apple uses a simple navigation rule that is easy to use and understand. It works on five main functions urging designers to think carefully about the app’s features.

You can’t deny that animation is something that improves the user experience and gives life to other elements. You know what? Even Google thinks the same way, but Apple doesn’t. Google and Apple have very different views on the purpose of animation.

Google sees animation to enhance user experience and give life to their components. Apple believes that animation should only get you from A to B without distracting the user from the real content.

Material design uses different types of animations to manifest the type of material to interact with. On the other hand, Apple believes that animation should be in such a way that it takes the user to the destination without distracting users from the actual content. In layman’s terms, Google leans on the human side; however, Apple relies more on the inorganic side.

We discussed four major differences between Google’s Material Design vs Apple’s Human Interface Guidelines — Depth, Clarity, Navigation, and Animation above and how their principles and goals crossover slightly. These aspects contribute majorly to the arena of UI design and make apps more intuitive and user-centric.

We hope you enjoyed reading this article and found it informative. This guide will certainly help you understand the design trends followed by the two giant companies — iOS and Android and help you craft the standout design for your next app.

A Quick Guide on Mobile App Wireframe vs Mockup vs Prototype

A Quick Guide on Mobile App Wireframe vs Mockup vs Prototype

When it comes to mobile app design, the terms wireframes, mockups, and prototypes often appear confusing to many. Well, don't...

What Are the Advantages of Hiring Professional UI/UX Designers for Your App?

What Are the Advantages of Hiring Professional UI/UX Designers for Your App?

Do you want to attract more users and drive more installs to your app by crafting a persuasive app design?...