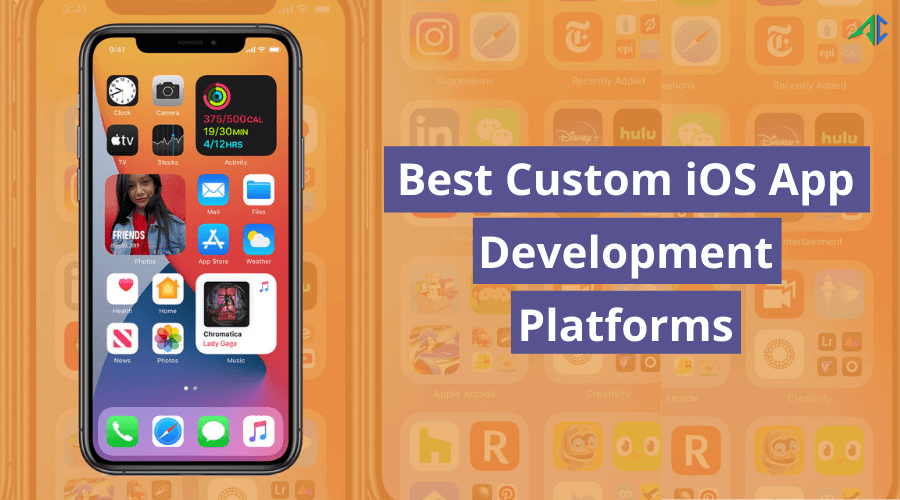 Have you ever wondered what makes iOS apps secure, versatile, and reliable, offering a great UX? The robust technologies used and platforms on which the iOS apps are made. This blog lists the top custom iOS app development platforms for professionals to leverage and create a standout iOS app.

Let’s admit the fact that the world has gone mobile, and there’s no looking back. Smartphones have become widely used devices for both personal and professional use. Therefore, in the modern world of thriving technology, having an app is a must for businesses to succeed.

Android and iOS are two major platforms in the world of app development, though the internet is filled with the Android vs iOS debate. Even though Android holds the largest market share globally, Apple is well-known for its brilliant execution and the most realistic, intuitive, appealing features, and above all, ever-evolving iOS app development trends. Even with less than 28% market share, iOS has led the way in revenue generation for businesses.

Success can be achieved with the right app backed by the right technology, platform, and functionality. Keeping that in view, businesses are considering iOS mobile application development as a lucrative move. Hence, looking for a reliable iOS app development agency that can help businesses win over competitors and generate better revenue.

Why Should You Choose iOS App Development for Your Business Growth?

As mentioned earlier, even though Apple has less market share than Android, many businesses give preferences to iPhone development services. These days, privacy is crucial, and no one wants to undermine it at any cost. Consequently, businesses ensure to offer users an app (on iOS platform) with which they feel secure in whatever activities they do.

Now “why should you choose iOS app development for your business growth”?

Well, there are various reasons. First, iOS offers a smooth, fluid, and consistent user experience, high security, better ROI, improved scalability, and more. The iOS mobile app development is rightly considered one of the most profitable resources that can help your business grow.

Now you know why even with less market share, iOS is a preferred OS among businesses, it’s time to go deeper and look at some of the most powerful custom iOS development platforms and how they can be of immense help in developing robust iOS mobile apps.

Objective-C is a superset of C language that extends object-oriented capacities for iOS app development. Objective-C inherits the syntax, primitive types, and flow control statements of C and adds syntax for defining classes and methods. Stability, well-tested, better APIs usage, and C++ compatibility are some of Objective-C programming languages’ greatest advantages. The major difference between Swift vs Objective-C is that it’s a lot harder to learn Objective-C.

Powered by JetBrains, AppCode is an intuitive IDE compatible with Swift and Objective-C. This IDE supports iOS extensions like XCode. AppCode is widely popular for its smooth project navigation, in-depth code analysis, time-saving development, productive unit testing, and more. This is one of the most vital and useful iOS app development tools used by numerous app developer companies.

With CodeRunner, developers can easily code in any programming language, either with Swift or Objective-C. iOS developers can use it for Swift on the IDE level with debugger support and syntax highlighting. CodeRunner is smooth, lightweight, simple to use, and one of the perfect tools to develop iOS apps.

RxSwift is a library for iOS app development. It is a highly recommended tool by iOS developers when it comes to asynchronous programming. It contains a massive library that enables developers to code powerful iOS apps that smoothly interact with the data, offer quick responses to the data and subsequent user events.

CocaPods is an essential library for iOS app development. Using CocoaPods, developers can easily avoid code duplicity. Developers can describe the code they’d like to pull in a Podfile, run pod install, and get the same versions as your whole team. This library enables accessing code from every possible source, including HTTP, git, hg, svn, and bzr.

Dash is more of an API documentation browser and code snippet manager. This tool provides online access to around 200 API documentation and more than 100 cheat sheets. With this tool, developers can easily create documentation sets to download. Besides, Dash integrates with other plugins and third-party sources.

Firebase is used for back-end iOS app development. It is a Back-end as a Service (BaaS) that offers an organized approach towards back-end infrastructure services, powering iOS apps’ back-end. Firebase offers data storage, static hosting, and user authentication. Along with that, it also offers social media user authentication features.

It is an open-source tool to build, facilitate, host, and manage iOS apps. Hosted on AWS, Parse supports automated backups, queries optimizers, and auto-scaling. Developers just need to write a few code lines and will automatically save the objects in clouds.

Helios offers essential backend services for iOS apps, including push notification support, in-app purchases, Apple Passbook integration, and others. This is one of the innovative tools to offer powerful iOS apps that deliver superior quality and fulfill all businesses’ purposes.

These were some of the most vital and helpful iOS app development tools that will allow developers to cut time and effort significantly. All these tools and platforms mentioned in this post are extremely valuable and perfect to cater to iOS app development needs.