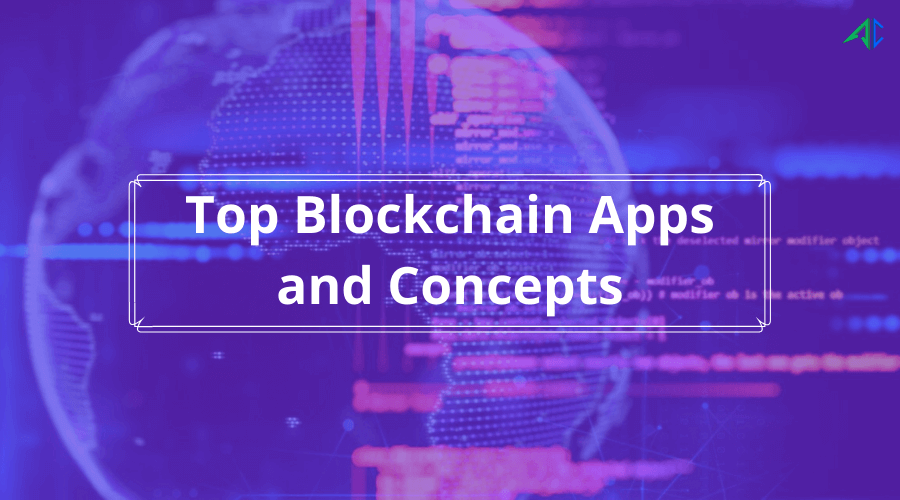 Blockchain technology is an exciting development of all time and it is experiencing wide-spread adoption among users. In this blog, we will talk elaborately about the top blockchain apps with the best concepts possible.

As per the recent forecast by Gartner, the business value added by blockchain will grow to slightly more than $176 billion by 2025, and then surge to exceed $3.1 trillion by 2030. That is such a colossal figure. Isn’t it?

The majority of tech-savvy people are all familiar with the term bitcoin and blockchain, but like most people, they do not know exactly how they work. We have detailed about blockchain technology below for your reference. Talking about the popularity, it is an emerging platform with the second most searched technological word on Gartner.

If you are a business, your blockchain application development should be done for both web and mobile app platforms.

Before jumping right to the list of top blockchain apps, let’s first comprehend the fundamentals of blockchain.

In simple words, blockchain is a digital ledger, liked using cryptography, that stores blocks in non-editable chronological order. It provides a secure way of anything that needs to be recorded and verified as having taken place. Besides, It is the technology that powers digital currency such as bitcoin, ethereum, and many others.

With the growing list of records and called blocks that are linked using cryptography, this technology allows digital information to be circulated originally not copied. Each block of the blockchain contains a cryptography hash of the previous block, a timestamp, and transaction data. It is also known as a public ledger stored in an issued network.

The recent trends manifest that blockchain technology is rising and will be beneficial for businesses in the coming future.

List of Top Blockchain Apps Used all over the World

Ripple is the very first name on the list of top blockchain apps used globally. It is a technology used as both a cryptocurrency and a digital payment network for financial services. Its primary focus is on connecting payment operators, digital asset exchanges, banks, and corporate through a blockchain system.

It offers users the most advanced blockchain technology for global payments through a digital asset called XRP or Ripple, which is also known as one of the most popular cryptocurrencies. Ripple is built on advanced bitcoin technology, and XRP is more expandable and faster as compared to other blockchains.

It reduces operating costs and offers new services to the users for quick international transfers and payments.
It is an alternative cryptocurrency based on blockchain technology, due to which exchanging of money becomes easy.
Its use enables banks to substantially reduce operating costs and offer new services to their users for instant international transfers and payments.

It delivers the best experience of global payments in today’s market across the world.
Ripple makes it easy for financial institutions to reach the growing network of 200+ providers across 40+ countries and six continents.
It is low on cost, provides instant payment, and considered to be one of the most reliable sources.

The second on the list of top blockchain apps is StorJ. It is an open-source, decentralized file storage solution that leverages the blockchain to provide end to end encrypted cloud storage services. Besides, it uses encryption, file transfer, and a blockchain-based hash table to store files on a peer to peer network.

StorJ is a blockchain app that intends to facilitate faster, cheaper, and secure file storage solutions than to other cloud storage platforms. StorJ has its network of a cryptocurrency named as StorJ token. It deploys several innovative technologies and methods to make sure that users can store and retrieve data in the fastest possible way.

The next on the list of top blockchain apps widely used across the world is Augur. It is an Ethereum-based decentralized prediction market that leverages to create a search engine for the future that runs on its token, REP. The platform offers its users a chance to develop businesses on which other users can place their bets.

Augur is a decentralized prediction market that can forecast the outcome of an event based on the ‘wisdom of the crowd’ principle. This method gets averaged into the most realistic possibility based on the information collected from the crowd.

Since the blockchain technology has become the part of prediction community, Augur provides its users an option with minimal fees, exceptional accessibility, and better accuracy than other markets.

Also read: How Chatbots Can Benefit Business In Healthcare, E-commerce, and Banking

Last but not least in the list of top blockchain apps is OpenChain. It is an open-source distributed ledger technology, highly suited for organizations that want to manage all the digital assets in a secure and scalable manner.

It uses Partitioned Consensus, where one instance will only have a single authority for validation of transactions. Besides, it provides free of cost transaction services and validated by the asset administrator that makes it more efficient than other platforms.