Node.js and Golang both are emerging technologies for mobile app’s back-end development. This blog is going to compare both technologies and let you know which one enjoys having an edge over others.

No one would be ready to compromise with the quality of their business app that they are going to develop, be it for startup or enterprise. So, the question is, what defines the quality of applications?

There are many factors such as code quality, scalability, performance, features, etc., that contribute active participation to enhance an app’s quality. The back-end is another most important factor that has also an active role in defining the app’s quality.

Even if your mobile app is complemented by the above factors, but not having a quality back-end, it will not be able to fulfill your business requirements.

There are myriads of other back-end development technologies like AWS, PHP, Python, etc., available for developers. So, choosing the right one for your business app matching your requirements and target audience’s expectations sometimes becomes quite stringent.

Meanwhile, you could avoid the situation by focusing on the most popular technology stacks for back-end development Node.js and Golang. Now, you may be keen on knowing which one will be right for your app, isn’t it?

Is Node.js better than the Golang?

Well, we are going to discuss here Node.js vs Golang in 2019 and will help you in choosing the right one, fitting your business requirements, goals, and expectations. Before getting delve into Node.js vs Go language debate, let’s introduce both. 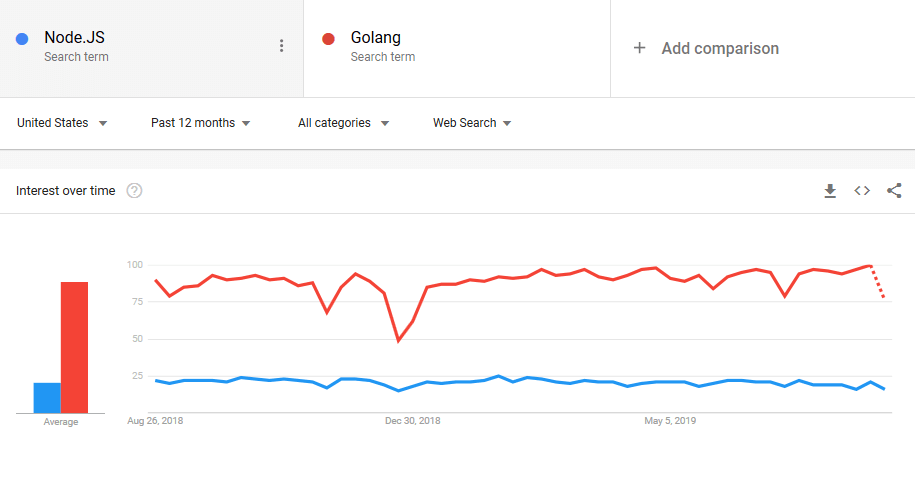 Initially released on May 27, 2009, Node.js is one of the most popular open-source cross-platform technologies for web and mobile apps back-end development. It comes with the ability to execute JavaScript code outside of browsers. Developers using Node.js, get the flexibility to use JavaScript for coding command-line tools and also for server-side scripting. Governed by Node.js Foundation, Node.js  can simplify the app back-end development and makes it more dynamic, with single programming.

Golang also is known as Go, first appeared on November 10, 2009, is another most popular open-source programming language. 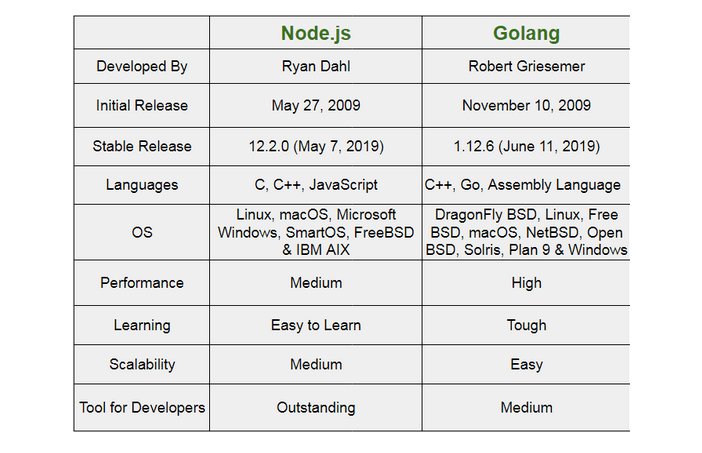 It is highly mature but not as Golang – the actual reason is, this technology works with numerous APIs, which generally go for continuous changes. Node.js also supports a large technology stack.

Both Node.js and Go were introduced in the same year and entered in the market.

When it comes to performance, Node.js is comparatively slower than it’s rival Golang. The reason is that Node.js is a JavaScript integrated language and unable to offer the same kind of performance similar to CPU bound memory. Besides, it also leverages the V8 engine and sometimes the process to execute program takes time and thus impacts the overall performance of Node.js.

Golang, on the other hand, is a fully compiled language and performs outstandingly. The main reasons are that it has lower app loading time and higher response time. It doesn’t use any virtual engine and ensures the process of program execution is often fast.

You may also like to read: Top Programming Languages to Overview in 2019

Golang is said to be highly scalable and the best for developing larger projects. Goroutines are considered to be the most important thing of Golang, which offers numerous threads that can be performed in one go with parallel tasks.

Node.js is single-threaded and this is the reason why certain CPU bound tasks block the event loop as well. This impacts on your app’s background performance and makes your app slow and thus annoying for your target users.

Golang has a better and powerful concurrency and is considered to be right for larger back-end development projects. Golang environment enables developers to run many goroutines quickly, even without much use of RAM.

When it comes to error handling, Node.js works on the traditional method to catch the issues quickly when they take place and perform greater solutions.

Golang, on the other hand, works on separate compilation and run-time errors, which makes it tough to handle errors. This certainly increases the difficulty for the majority of developers.

Based on JavaScript, Node.js is one of the most popular technology for app back-end development. This makes the technology easier to learn for individuals and they can then easily start developing the back-end.

Is Golang a back-end language? Golang is itself a language. So, developers need to have an in-depth knowledge of various important rules, processes, programming concepts, etc., to develop the backend for web and mobile apps.

Node.js is available with various ready-made solutions for app back-end development. So, these reduce the overall development time, effort and cost, and streamline the overall process. For instance, NPM includes approximately 8,00,000 built-in building blocks that developers can easily install and run smoothly.

Golang is available with a full standard and a comprehensive library that includes features, which act independently of any third-party. And this is the actual reason why Golang includes a limited number of tools.

For deployment, Node.js requires the installation of Node Package Manager (NPM) on the server or pulling down the application project code with pm2 on the server, to run it most effectively.

For app back-end development with Golang, there is certainly no requirement for the locale. The binary, produced automatically from the build, generally gets dropped automatically to the server.

Node.js is far ahead of Golang when it comes to community support. It has a vast community consisted of numbers of distributors and also gets support from popular brands such as Microsoft, IBM, Intel, PayPal, and others.

Golang has a small community with limited contributors. However, it is growing gradually year by year.

We hope that you now have some understanding of the right technology for your app back-end development, after going through the above Node.js vs Golang debate. In some sections, Node.js is leading over Golang and vice-versa. So, it would be a good idea to define your business requirements and choose the right technology that matches perfectly with the same.

Launching an app is the most important step in introducing your app to the public, but it takes a lot...