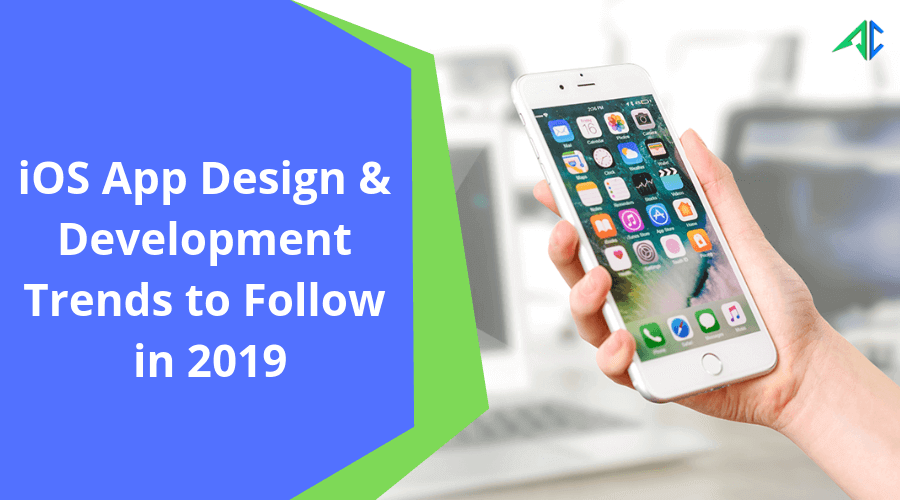 Are you looking to develop a feature-packed iOS app backed with the latest trends? This is the right post for you. This blog lists the top iOS app design and development trends you should look forward to in 2019 and develop an intuitive iOS app for your business to thrive.

Apple needs no introduction, doe2  s it? This company never fails to amaze you with its incredible offerings. The advancement of iOS technology has led to various greater innovations in the field of mobile applications as well. Like always, iOS is ever-ready to take on and drive the mobile technology boom in 2019 too.

With each passing year, the new vogue comes and goes. The iOS mobile app development industry is continuously evolving at a break-neck pace, and it’s not going to stop soon. Having said that, apps developer companies who stay up-to-date with ever-changing trends in iOS app design and development stay in high demand as they assure businesses to deliver “beat-the-competition” apps.

And it’s no rocket science to understand that every business today (irrespective of size and niche) wants to stay ahead and win over a competitive advantage over others, along with generating better ROI. For that reason, they’re looking for the ideal iOS app development process and going with reliable iOS development services as iOS development is deemed a revenue-driven investment.

However, with the advent of technology, the competition is also surging. This is why, when starting off with iOS app development, it’s crucial to stay abreast of the latest happenings in the world of iOS development. iOS developers should keep up-to-date with the latest iOS app design and development trends that will rule in 2019.

Augmented Reality (AR) comes with tons of benefits that can make the app more interactive. The demo Apple showed on iPhone 8 and iPhone X proves that AR development with the latest ARKit will be a game-changer trend in iOS app development in 2019.

The new ARKit makes it easier for iOS developers to build various AR experiences, enabling apps to interact with real-world objects. Like IKEA (a well-known furniture retail company), developers utilized the power of augmented reality and allowed users to get the feel of products without physically bringing them into the home.

Artificial Intelligence (AI) is taking all the industries by storm through its charm, and iOS app development is no exception. Siri today is one of the smartest digital voice assistants backed with AI. With the launch of iOS 12, Siri will offer third-party iOS apps, namely Siri Shortcuts. So AI development with iOS is going to be one of the most demanding iOS app development trends that will indeed dominate 2019. Don’t miss out on this one!

Core Machine Learning (CoreML), launched by Apple, has gained a tremendous response from users in recent times. It is beneficial for making intelligent applications across Apple devices.

App development with ML has always been in demand, and Apple integrated a whole new level of intelligence with CoreML. CoreML has taken care of a lot in Apple devices. Siri, Camera, QuickType, are all integrated with CoreML using real-time ML algorithms.

Apple recently released its Swift 5 programming language with a stable Application Binary Interface (ABI) and binary compatibility. Swift development has advanced since its launch and is considered the future of apps for macOS, iOS, wearable OS, and TVOS.

The ABI stability will help developers embed the Swift libraries with the runtime within the OS, which is compatible with iOS apps developed using Swift 5 or later versions. Plus, the ABI stability in Swift 5 will also reduce the app size.

The demand for digital wallet app development increases day by day, seeing the rapid rise in online transactions. The iOS developers have made the process more seamless and quicker by integrating payment gateways with Apple Pay – a mobile wallet application. As per Loup Ventures, Apple Pay transactions are expected to see 200% growth by 2019. Apple Pay is highly secure and eliminates the need to keep details saved by users.

IoT enables interconnecting all the internet and computing devices together and allows the exchange and transfer of data and information. According to Statista, there will be more than 75 billion IoT-connected devices in use. That’s why IoT-enabled mobile app development is gaining popularity. Plus, the iOS app powered by IoT connects bands, wristwatches, and other wearable devices to smartphones.

Cloud technology helps organizations store a massive amount of data and access functionality in abundance. And that’s why many enterprises are investing in cloud mobile app development.

Cloud-based apps directly run on the cloud. It enhances the internal memory of smart devices, thus increasing productivity and collaboration with mobile apps. The best thing about cloud-based apps is users can access these apps smoothly without installing them.

Talking about household penetration research by Statista, it is expected to reach nearly 54% by the year 2023. And this calls for a huge acceptance of smart home devices across the globe, especially in the US.

Apple Homekit is going to be one of the biggest iOS app development trends in 2019 and beyond. There is a huge opportunity for business owners to build smart home devices and apps using Apple Homekit to generate huge revenues and become successful.

Apple is known for ensuring the utmost security of data for the users. Apple made it possible through App Transport Security (ATS) by implementing Transport Layer Security (TLS). The TLS versions have been secured on all Apple platforms. In 2019, the iOS app developers will strengthen the iOS app’s security and prevent hackers from intruding. The year 2019 will prove to be the year of reducing hassles for adding more security add-ons.

The year 2019 is going to be the year of innovation. Knowing about these iOS app development trends is like a battle half-winning. If you want to beat your competitors and have a walkover in real, try implementing the trends mentioned above diligently, and more importantly, the right way! So are you ready to create a standout iOS app leveraging these latest iOS development trends? Good luck!

Yes, you read it right. Apple (going forward) can't force developers to use in-app purchases. The US judge Yvonne Gonzalez...