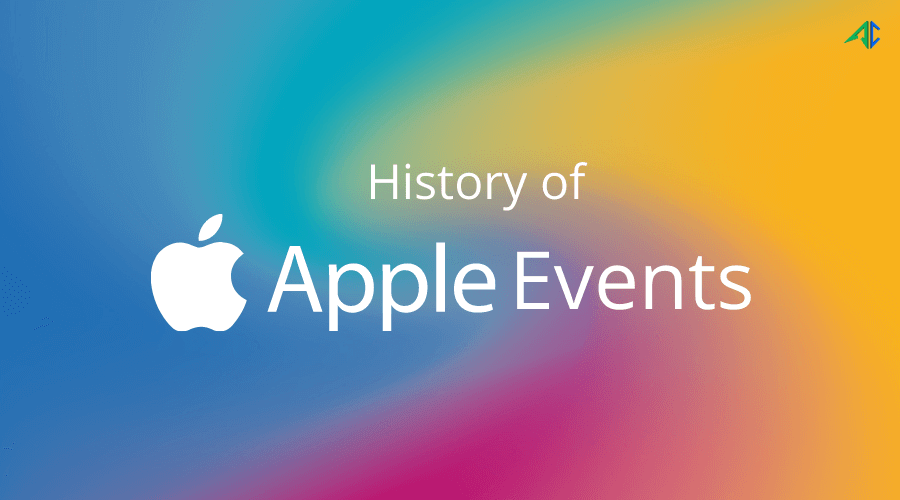 Apple’s events are memorably flavored by the sensory experience they deliver to its audience. This blog will take you through the history of all the major Apple events, some key moments, and how their approach has developed over the years.

When Apple launches a new product or hosts an event, they generate a massive buzz. The global interest that Apple generates for its events is phenomenal. Apple events are highly anticipated among attendees, fans, and iOS app design company due to their unique approach. Close to 2 million people watched Apple’s iPhone event live stream on YouTube last year. Within just 10 minutes of when the event kicked off, Apple had over 500,000 viewers.

Do you see the popularity?

Apple knows its audience and leaves people returning for more by introducing the latest products, software, and releases at their consistent events per year. This can influence the app industry greatly and also help apps development companies to design and develop user-friendly apps, enhancing user experience.

Today, we will talk about all the popular Apple events history that took place since its inception. So, without any further ado, let’s get right in!

The Apple reign began with the Macworld 2007 event. This was one of the most important events in Apple’s history. In this event, Steve Jobs announced that it would now only be known as Apple Inc. (previously Apple Computer Inc.) as they adopted other devices (especially the iPhone) and not only focused on computers. Apple’s Macworld 2007 came with a bold proclamation that everything was about to change.

Bold as it was, Apple lived up to the expectation and introduced the very first iPhone. Steve Jobs was also able to capture the audience to introduce “The World’s Thinnest Notebook” (the MacBook Air). Steve Jobs proved that with minimal resources and basics could still get the job done and that too efficiently.

Worldwide Developers Conference (WWDC) 2008 kicked off June 9 at 10:am PDT with a Steve Jobs keynote, and that was one of its kind speeches in Apple keynote history. The WWDC 2008 was bustling. The conference heavily focused on iPhone 3G alongside the Apple Store that June, new software, hardware updates, third-party apps, SDK, great tools, and more as the iPhone generation’s start.

Apart from that, some renowned guests such as then software engineer Scott Forstall also took to the stage for giving a more in-depth discussion about Mac OS X 10.6 and the future of the platform. This was probably one of the most successful, memorable, and important events in Apple history that Steve Jobs hosted.

That was one more WWDC down and another round of speculation out of the way in Apple event history. This event started at Moscone Center with the announcement of the iPhone 3G S, MacBook rebranding, but didn’t really shock anyone as it seemed that most were known of this new launch. This WWDC event got new MacBooks, final Snow Leopard details, and a release date for iPhone OS 3.0. Overall, it was a good event in the Apple keynote history as many expected, and some unexpected launches happened.

Steve Jobs returned after taking the previous year (2009) off with weakening health and introduced iPhone 4 and FaceTime with full enthusiasm using his traditional basic approach but inspiring thousands out there. While iPhone 4 was the star of WWDC 2010, a big part of the entire event was apps.

In this event, Apple gave a release date for iOS 4, which finally brought multitasking and added support for folders to keep all those apps organized and in place. The iPhone 4 subsequently was one of the most popular models. After urging attendees to go out and purchase them, Steve Jobs managed to show the human side of Apple rather than just the marketing giant.

WWDC 2012 was a heavy day in the history of Apple events as, during this event, the presence of Steve Jobs was definitely missed as he had passed away months before. New CEO Tim Cook took over the event and gave his first keynote.

The year 2012 came with the biggest announcements, including the new MacBook Pro with retina display refreshes for the rest of the MacBook lineup, a full helping of new features coming in OS X Mountain Lion and iOS 6, a completely redesigned maps app, and a newly evolved Siri that moved many attendees.

With bright colors, gradients, and flat layers, Apple’s WWDC 2013 logo certainly gave away a first impression of what was to come in iOS 7, even if it didn’t go so far as to mimic it perfectly. The Jony Ive-designed iOS 7 was detailed in full, as was the OS X 10.9 Mavericks. Apple definitely enticed its attendees with promises of a lot more products. Along with that, Apple also introduced its long-awaited new iTunes Radio streaming service by organizing the band Vampire Weekend to perform.

With more emphasis on products, in this Apple September event, Apple showed the audience how collaborative working could be used for iCloud using iWork with a small demonstration. This helped break apart the usual 20 min presentation to make it a lot more enjoyable.

Another aspect of this Apple event that really stood out was Apple’s creative celebration of its customers’ use of their products. The best thing about the event was that they created a video of everyone from football players, musicians, doctors, students, engineers to farmers to highlight how inclusive and beneficial their products can be to everyone.

With a focus predominantly on services and software, this event is one of Apple’s most important events as Apple launched a new programming language named Swift. Tim Cook came up short at the conference and failed to awestruck the attendees, leaving everything a little negative, despite the technological advances. OS X 10.10 Yosemite and iOS 8 brought the desktop and mobile devices closer together than they’ve ever been before. Overall, it was a good event for developers only.

This Apple September event will probably go down in Apple event history and not for the right reasons. There was a lot of anticipation and hype surrounding the iPhone 6 launch. The first thing attendees noticed on the iPhone 6 and iPhone 6 Plus with Retina HD screen powered by 64-bit A8 chip to offer up to 25% faster CPU and 5% faster graphics.

After that, Apple announced a new payment process called Apple Pay, which uses NFC and touch ID to confirm purchases. The much-rumored Apple Watch became official. The event ended with a music declaration; Tim Cook introduced U2 to perform on stage and gave out the brand’s newest album for free on iTunes.

This time Apple chose a different event structure in 2015 and decided to host the event in San Francisco. The event announced OS X El Capitan with improved performance along with iOS 9 with refinements. Siri also got proactive with suggesting individuals you want to call, apps you may want to use, news you want to read, and more.

With this event, Apple Maps finally had public transit directions. The last major reveal of this event was Apple Watch getting a big software update and the one and only Apple Music with ‘n’ number of features.
Apple Special Event 2015
After a terrible reception of the iPhone 6 due to technical difficulties in 2014, Apple had a great comeback in 2015 and brought some big players to the conference in the form of Microsoft. During this event, Apple unveiled the iPhone 6S and iPhone 6S Plus, a new set of Apple Watch Sports, the iPad Pro and iPad Mini 4, the updated Sir, and the new Apple TV.

WWDC 2016 chose to live stream the event to widen their audience and luckily kept their technology in check, which created a better impression than in previous years. Apple’s WWDC 2016 will be one memorable Apple keynote history event as it was full of incremental updates to OS’s for the Mac, iPhone, Watch, and TV and moves to open up services like Siri and iMessage to developers.

There were also many redesigns like new notifications, lock screen interactions for iOS, a new command center for the faster Apple Watch, and changes to Apple News, Music, Maps, and others. This event is one memorable event in the history of Apple events, which specifically catered to what the attendees had asked for and went down as a huge success despite the lack of new products and hardware this year.

Apple September event 2016 saw the announcement of the iPhone 7, iPhone 7 plus (without a headphone jack) along with a new Apple Watch, new MacPro, new iPad, iPod Touch, MacMini, and new MacBook. During this event, Apple also unveiled iOS 10 and WatchOS 3. The event had few surprises like the ‘Mario’ game for iOS, etc.

WWDC 2017 started with Tim Cook taking the stage to announce updates headed to iPhones, MacBooks, Apple TV, and more. The major highlights from the WWDC 2017 keynote were:

WWDC 2018 took place in San Jose, California. The annual conference tied together all of the latest updates to Apple’s platforms – iOS, macOS, watchOS, and tvOS, along with some bigger initiatives focused on bolstering privacy and security and curbing technology addiction.

Following Apple’s 10th-anniversary edition iPhone X and accessories that came with it. The company was back with new devices that fully embrace notch-life, with the three new iPhone models: the XS, XS Max, and XR in Apple’s September event 2018. The home button was no more there, and devices used Face ID as the security unlock system. Along with iPhone XS XS Max, and XR, Apple also introduced Watch Series 4 during the event.

WWDC 2019 covered the major announcements related to OS updates and new releases made by Apple. The announcements included iOS 13 launches (with dark mode and updated apps), iPadOS, macOS Catalina, watchOS 6, tvOS 13, the unveiling of the all-new modular MacPro and Pro Display XDR, and much more.

Apple introduced the SF symbols app with over 1,000 configurable symbols for developers. Along with that, Apple introduced new security protocols for HomeKit and app permissions, Siri had a more natural voice, with new features on Carplay and AirPods.

Apple’s September events are mostly around the new iPhone launches, and Apple’s September 2019 was no different. Apple unveiled iPhone 11, iPhone 11 Pro, and iPhone Pro Max (with various incredible features), Watch series 5 (with significant upgrade enhancements compared to the previous model like no-sleep), 9.7-inch iPad (with A10 Fusion chip, allowing 4K editing), Apple TV+ (a streaming service that broadcasts original content), and Apple Arcade (for combining all the games for iPhone, iPad, Mac, and Apple TV in one place.

Apple’s yearly conference for software developers always kicks in with something great and leaves everyone stunned. WWDC 2020 announced 2020 versions of iOS, iPadOS, watchOS, macOS, and more that can influence the app industry greatly.

All in all, these were the major key moments of Apple events since its inception so far. The reason behind Apple’s events popularity is the company knows its audience and leaves people coming back for more by introducing some amazing launches at every event. Apple is now working on ‘AirTag’ that will compete with products like Tile, offering up Bluetooth tracking for items like keys, wallets, cameras, and more.

Now you know what the next Apple event 2020 has for you on its plate to offer. Stay tuned and wait for the next event.