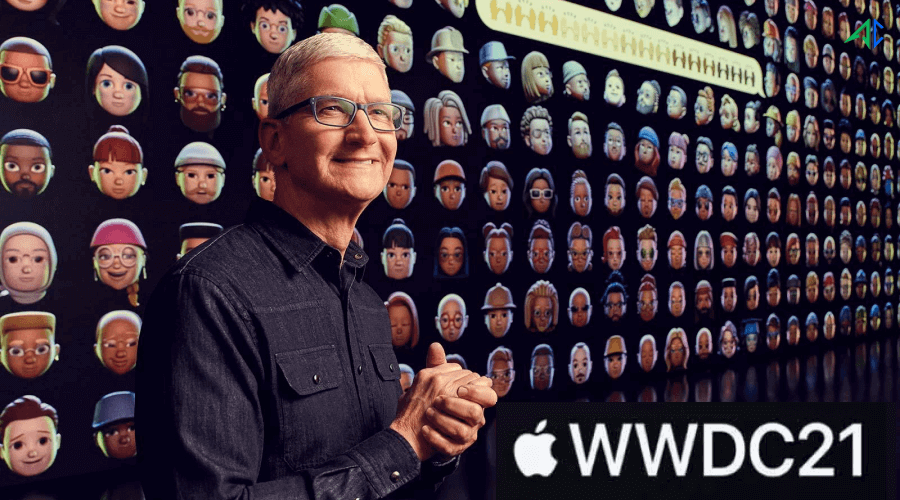 Apple’s WWDC 2021 was a jam-packed event. The company showed off everything they have been working on for months. They made plenty of exciting announcements. This blog rounds up everything Apple announced at the WWDC 2021 keynote event. Let’s get right in!

Woah! It’s that time again. Apple kicked off its online-only annual Worldwide Developer Conference (WWDC) 2021 event in the same exciting way as it always does. Last year, Apple amazed its fans and iOS development firms by announcing some unforeseen, exciting tech splashes, such as M1 processor, new MacBook Air, macOS Big Sur, and more with the “One More Thing 2020” event in November 2020.

And this time, Apple is back with the WWDC 2021 event, where they revealed the biggest updates that Apple fans want access to as soon as possible. With the jam-packed news and announcements related to iOS 15, the new macOS Monterey, Apple fans also saw substantial improvements to FaceTime.

Just like WWDC 2020 (last year), Apple held this year’s WWDC keynote event held virtually with no physical gathering in California due to the ongoing global pandemic. The Cupertino, California-based giant showcased its new software developments at this developer-focussed event. The five-day event had over 200 in-depth sessions for the developers to learn new stuff.

So with no further ado, let’s delve into the pool of Apple’s WWDC 2021 event right away!

This digital event gave developers worldwide access to the future versions of iOS, iPadOS, macOS, watchOS, and tvOS. Plus, it also allowed them to engage with Apple engineers through sessions and labs.

We know, not everyone has the time to tune in to the live stream. That’s why we’ve picked all of the biggest news for you to read through.

Craig Federighi and the rest of the team announced iOS 15 (the latest version of the iPhone OS) at WWDC 2021, bringing a raft of new features. iOS 15 brings improvements to FaceTime. It now includes spatial audio, portrait mode to blur backgrounds, grid view to speak to multiple people simultaneously, a new SharePlay feature that allows you to share media with people on FaceTime virtually, and more.

Like iOS 15, iPadOS 15 will also get numerous, awestruck new features. The new iPadOS can bring changes to the home screen of the tablets to better align with the new hardware. The users can rearrange iPad apps by putting widgets on the screen and the App Library feature. Moreover, Apple announced some accessibility features, available through both iOS 15 and iPadOS 15 updates.

Apple’s next big announcement was macOS Monterey. macOS Monterey brings oodles of features; however, the most exciting feature is, it lets users use the same cursor and keyboard across macs and iPads. This feature is called Universal Control. That said, Monterey also adds improvements to FaceTime, SharePlay, and Apple’s new “Focus” statuses that are coming to Apple’s other software platforms.

Apple announced a new software version for Apple TV users at WWDC 2021 with improvements around a better content playback experience. Apple ensured a lot of focus on Apple TV this year. With the new version, tvOS has a raft of new features designed to complement other products and experiences within Apple’s hardware and software ecosystems.

Apple changed its paid iCloud plans to iCloud+, and with that comes a few additional perks. Apple’s iCloud+ bundles a VPN, private email, and HomeKit camera storage. Apple is adding something called tracker-blockers in its Mail app that will hide user’s IP addresses and locations. All the new features will be a part of the new iCloud+ subscription, which will be available at no additional price to current iCloud-paid users.

Surprisingly, Apple announced some significant improvements to AirPods as well this year. Apple is making AirPods easier to hear and find on the “Find My” network and the ability to announce the notifications. The announcements also include a new feature coming to AirPods called “conversation boost,” helping people better understand who they are talking to in real-time.

That was it for WWDC 2021! These were some fascinating announcements Apple unveiled at WWDC 2021. However, many fans and apps development companies expected some more announcements, such as MacBook Pro 14 and 16 inches, Mac mini, iMac 32 inches, Mac Pro, beats studio buds, and more.

Maybe, Apple is saving them all for the next event. Who knows? Have any predictions for Apple’s next event?